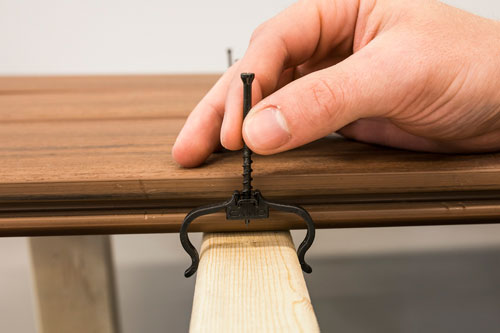 CAMO is dedicated to  providing the best deck fastening installation experience in the industry.   Whether you install decks for a living or are a do-it-yourselfer, CAMO products are designed with you in mind; hard-working folks who take pride in their work. From fasteners, to fastening guides and tools, all CAMO products are engineered so your work looks good and performs as you expect it should.

The CAMO® Edge Deck Fastening System is the first edge deck fastening system that easily and affordably attaches treated lumber, hardwood, cedar, composite or PVC deckboards directly to the substructure, creating a beautiful, fastener-free deck surface. CAMO® deck screws and a CAMO® Marksman tool combine to deliver a fastener-free deck surface at a price that makes getting the job easy and installing the deck even easier. The system includes:

IWP is proud to introduce CAMO’s new EdgeClip System.  The EdgeClip hugs the joist and the EdgeXClip (For angled applications) hugs the groove in the deck board so no partial installation of the fasteners is required.  For EdgeClip, setting the clip is simple. Attach each clip to each joist, slide the board in place, then move to the next board. You can set multiple boards before driving the screws.  For EdgeXClip, just pinch the wings and slide it into the groove. Angle the deck board in any direction over the joist. Like the EdgeClip, you can set clips for multiple boards before screwing the boards down. You can install an entire deck surface using this method, then you can drill each screw fast using the CAMO Never-Miss™ Guide included in every pail. The Never-Miss Guide quickly directs the driver bit to the screw head.

For installation 5 times faster  use the new stand-up tool, the CAMO DRIVE with Clip Guide. This tool gets you off your knees and lets you build decks faster and move on to the next job.  This tool is versatile. It comes with three guides for Edge, Clip, or Face Fastening. It also can be used on any decking material from treated lumber, cedar, redwood, hardwoods like IPE, to composite, capped composite and PVC.